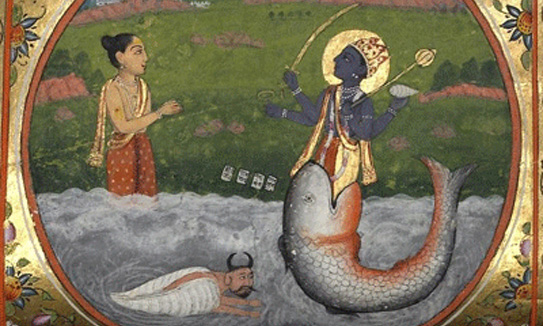 A Vedic and India Perspective

People throughout the world retain the memory of earlier great spiritual civilizations that existed long before our current reckoning of history. Myths of Atlantis and Lemuria, stories of great floods and antediluvian kingdoms exist in all the ancient literatures of the world. These include Jewish, Greek, Egyptian, Babylonian, Hindu, Chinese, and Mayan traditions to name but a few. The ancient Egyptians and Sumerians– whom we credit with the founding of civilization–saw themselves only as offshoots of earlier more enlightened, pre-flood cultures. They looked in wonder and awe to such bygone ages, a curious response if they indeed were the real inventors of civilization! Yet this memory is much deeper than any literary records. It is engrained in our human psyche as a collective or racial imprint. Many indigenous and aboriginal peoples retain such knowledge and poets and novelists of all types reflect it in their visions. This is why stories of ancient mysteries are always so captivating. They remain popular in spite of the many efforts to deny them. Orthodox archaeology has long tried to dismiss such flood stories as mere fantasy, or reduce them to more recent and smaller events. Yet we do have clear evidence of a great flood at the end of the last Ice Age around 10,000 years ago, which generally agrees with ancient chronologies like that of Plato’s Atlantis. In addition, new archaeological finds, particularly those of marine archaeology, suggest the existence of several older submerged civilizations from areas as diverse as Cuba to India, indicating that hard evidence is out there. The end of the last Ice Age brought about major geological disruptions, changes of climate and the raising of the oceans by several hundred feet that would submerge or destroy most human habitations, which even today are located largely by the ocean or in low lying areas. The difficulty of finding evidence of pre-flood cultures should be not be confused with their lack of existence.

Graham Hancock has been at the forefront of alternative archaeology and the effort to connect this memory of lost civilizations to archaeological findings all over the world. Hancock is not only innovative; he is probing and scientific in his analysis. He follows the cutting edge of marine archaeology and examines the sites himself. He has also taken care to examine the literature and traditions of the regions he investigates, which help locate and interpret such sites that local peoples are surprisingly still aware of.

The popularity of Hancock’s work shows how irrelevant are standard academic views of the ancient world, which few people read and few who read remember. Current academic views reconstruct ancient civilization as a crude effort to evolve the type of ‘advanced’ technological civilization which we have today.

These views are not only superficial (for example, reducing cultures to pottery styles) but wrong. Certainly the ancients did not view themselves according to our modern conceptions of civilization based upon politics and economics. They saw themselves carrying on spiritual traditions from pre-flood cultures, which had a higher level of civilization than they did, including occult and technological knowledge that was lost to them.

Why is it, one may ask, that orthodox archaeologists are so slow to examine or explore these older traditions? The reason is simple. Such discoveries would totally undermine current historical and cultural views of humanity. Our civilization may not be the first, the last or the highest. Ours may just be one in a series of many civilizations, whose purpose may be more spiritual than material. Our civilization may not be unique and may even be a deviation from the broader movement of human spiritual culture that reaches out to the universe on the level of consciousness, not simply through technology. This is what the Vedic and Yoga tradition teaches us as well.

Such a prospect would require not only a total rewriting of history but a total reexamination of the purpose of our species and the meaning of life, which can only be disconcerting to existing paradigms and the institutions which uphold them.

The Role of India

In most examinations of lost civilizations, there has been a surprising tendency to leave India out of the picture. While the wonders of Egypt or Sumeria are often discussed, the equally great wonders of ancient India are seldom mentioned. This is strange because India is the main country that has preserved our ancient human heritage, both materially and spiritually. For example, in India today one can observe the same type of temple worship still being practiced like that which once occurred in ancient Egypt, Babylonia, Greece or Mexico, along with the same emphasis on the spiritual and the sacred as the focus of life.

India has extensive archaeological remains that are among the largest and oldest in the world. Harappan India or India of the so-called ‘Indus Valley Civilization’ was the largest urban civilization in the world of its times in the third millennium BC (3100-1900 BCE), with major sites extending from the Ganges river in the east to Afghanistan in the west, from the border of Iran to near Bombay. However, India’s role in ancient civilization has been largely ignored in favor of more culturally comfortable, though geographically much smaller cultures in the Near East, in spite of the fact that such ancient cultures frequently lauded the greatness of India themselves. How many of us know that the civilizations of Egypt and Mesopotamia would fit easily into Harappan India with much room to spare, so much larger was the Indian civilization. There has been an even greater ignoring of the Vedic literature of India, which is by far the largest that has been preserved from the ancient world.

The many thousands of pages of this mantric literature dwarf all that the rest of the world has managed to save from such early eras. Yet instead of putting Vedic literature on par with the Pyramids of Egypt in terms of civilizational achievements, scholars reduce the Vedas to the rantings of illiterate nomads from Central Asia, who by all accounts should have left no literature anyway. The spiritual wisdom of the Vedic mantras is ignored according to a view that the Vedas are only a nature poetry of barbarian invaders. This is in spite of the fact that the Vedas were the foundation for the great yogic and mystical traditions of Asia through Hindu and Buddhist traditions and the whole science of Yoga, which frequently refer to them. Not only has Vedic literature been ignored, there has been an additional effort to keep the Vedic literature separate from the great archaeological remains in the country of the various Harappan sites. We are told that the great urban civilization of ancient India and the great Vedic literature that India preserved as its ancient heritage are not connected to each other at all. We are left with ‘a civilization without a literature’ and a ‘literature without a civilization’, though both a great literature and a great civilization came from ancient India and often use the same symbols.

This is in evidence in the many Vedic images found in Harappan sites and on Harappan seals like the Brahma bull, figures in yoga postures, Shiva-like Gods, fire altars and swastikas. Here the new geology and marine archaeology has ruled in favor of the ancients. Vedic literature describes its homeland on a long lost river called the Sarasvati, which according to Vedic descriptions flowed east of the Indus from the Himalayas to the Arabian Sea. Modern satellite photography has clearly indicated the existence of this great river, as have numerous geological and ground water studies conducted over the last few decades, which show that the Sarasvati was once over ten kilometers in width and flowed from the mountains to the sea, dwarfing the nearby Indus. As the Vedas say, the Sarasvati was the largest river of the region at the time. It was the center of a great civilization and the vast majority of ancient Indian and Harappan ruins have been found on the now dried banks of the Sarasvati.

As the Sarasvati River dried up around 1900 BCE, the Vedic civilization which describes the river as its immemorial homeland must be much older.

Graham Hancock breaks down this anti-India barrier and elevates ancient India back to the forefront of ancient civilizations. He shows that the spiritual foundation of the Vedas cannot be divorced from the earliest civilization of the region. He quotes the Vedas to show how they reflect a great flood and the establishment of a new civilization after it. Hancock shows how the Vedas reflect a maritime civilization which developed amidst the crashing glaciers that produced the waters to make the now dry Sarasvati the largest river in India. Marine archaeology shows a number of submerged sites off the coast of Kachchh and Cambay in what would have then been the old Sarasvati delta region. A Gulf of Cambay urban site has recently been dated by Indian archaeologists to 7500 BCE. This would totally change our view of history as we now date cities only after 3500 BCE. It is here that Hancock is now seeking what he calls the holy grail of his quest for this older civilization of the pre-Ice Age era. It is here that we can look for the tradition of Manu, the Hindu flood figure and first king and law giver, and the great sages, the Angirasa and Bhrigu rishis who were traditionally connected both to Manu and to the sea. This earlier civilization was preserved in India in two traditions. The first is the Vedic tradition, which grew up on the Sarasvati River at the end of the Ice Age. The second is the Tamilian tradition, which reflected pre-Ice Age cultures off the coast of South India. Hancock recognizes both and is also exploring sites by South India, near Mahabalipuram, an ancient sacred Tamilian area that evidences a large urban site out to sea. Clearly we are just beginning to discover the mysteries of ancient Indian civilization, which unfold another layer of world civilization that we have forgotten. Hancock’s work marks a new era in our study of the ancient world, not only in terms of the revolutionary nature of his ideas but also with the vividness that he projects them, using the tools not only of science but those of the mass media as well. We must now look to an older stratum of maritime civilization that existed before the end of the last Ice Age in order to really understand the movement of history. And for this India has an important, if not central role. Indians often complain of how the British distorted their history. Here Hancock, a new Britisher, provides the cure. The question is whether Indians will take it up and follow his lead into reviving the ancient spiritual glory that the Vedas, Purana, Agamas and Sangam literature so eloquently proclaims. Let us hope they do. There is much in this vast literature that reflects such an older and more spiritual heritage for humanity that connects us with the conscious universe as a whole.

Dr. David Frawley (Pandit Vamadeva Shastri) is a Vedic and yogic scholar who has been at the forefront of the new historical view on ancient India.